If you have ever been to the capital of Belgium in Brussels, the Manneken Pis should be on the list of tourist attractions. But at first sight, most people get disappointed. This 61cm tall, bronze statue looked so impressive on the pictures. One might wonder why it’s on the list of attractions at all. What’s the story behind the peeing little boy?

There are many myths about the origin of Manneken Pis. Some say the fountain was first erected in thanksgiving by a father who had lost his little boy, only to find him two days later urinating on the corner, where the statue now is located … interesting.

Another fable claims that during a siege of the city in the 14th century, an unknown boy stopped explosives from blowing up the city walls by peeing on the fuse. The fountain was erected in gratitude … this makes sense.

While visiting the city of Ghent, a tour guide explained a different tale about the boy. Leather makers needed urine to soften their working material. The urine of little boys were preferred, because of its purity … sounds reasonable.

The small boy has had an adventurous life over the centuries, having been stolen on several occasions. But he always found his way home. In 1745, he was stolen by a French soldier, much to the annoyance of the local citizens. To make amends, King Louis XV knighted Manneken Pis with the result that French soldiers had to salute the statue when they walked past it! Then again, the original bronze Manneken Pis was stolen and damaged by a prisoner in 1817. And as a consequence the Manneken Pis statue was recast. 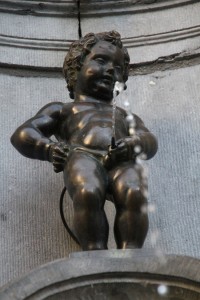 So next time you get a chance to take a stroll in Brussels, look for Manneken Pis. The fountain is located at the corner of Rue de l’Etuve & Rue du Chene, within walking distance from the Grand Place. Here is the exact address: Rue de l’Etuve 31 / Lievevrouwbroersstraat 31.